I have been playing a Ping G10 that I was very inconsistent with, and decided to trade it in on a new driver. There was always that one little thing about my Nike club that bothered me. It is both hard to get on and does a poor job protecting the head. Of course both head designs can be special ordered with most custom shafts available today. Just my two cents, I know this review is old, but MY club is new, and I thought I would tell the bargain hunters out there that it is worth a try! Despite all that the ball still travelled a distance mike was, if not awe inspiring, certainly not disheartening and although not every shot was dead straight the wayward shots certainly made more of an effort to stay on line dyo some of my recent drives! The buddy I was playing with said it was the most amazing thing he had ever seen…I went from fading to drawing with one adjustment!

I was hitting it aroundnow with a new Dymo I’ve had this driver in my bag for about 6 weeks now and really love it.

Although this version looked much better behind the ball than its squared counterpart I found the ball flight and sound a little disappointing and overall it seemed to lack a bit of feel and performance for a club at this end of the market. After several rounds with the Dymo, I decided to take the Dymo 2 on the course. They designed a good club now maybe they might turn their attention to the headcover, but then again there are always aftermarket headcovers that will do the job nicely.

The feel from the club face was very good, although it did not sound as good as the square version. If you want to try a driver hit the new TM R9 supertri and you eymo literally feel the difference in one swing.

There was always that one little thing about my Nike club that bothered me. Of course they all come with the most poorly designed headcover in the industry. I am Curious what swing speed and tempo you guys have that works so well with the ProLaunch Red.

Again the sound from impact was much like its sibling: So realize how painful it is for me to eat my own words. My ball flight was right on where I like to see it, and I was able to hit the ball lower or slightly higher if needed with Dymo 2 than with the Dymo. If you are a lover of Nike drivers then give it a try as it may be for you.

I wouldnt say the distance is a whole lot better ,but, that is not my focus for improvement. Nike say this can crate a maximum of 42 yards difference between the two widest tracjectories.

I have the Sumo and I have tried the Dymo twice. 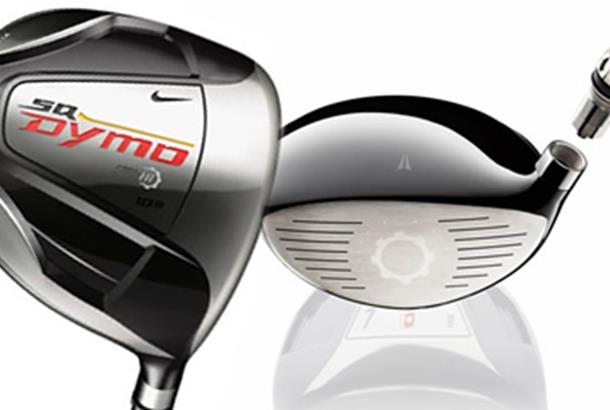 If working the ball around the course is your thing, this is not the driver for you. The CG is higher and more forward for the lower lofts to reduce spin and create a more penetrating ball flight.

The Victory Red line of forged irons are beautiful and now the Dymo line gives them a solid driver to go with them. I felt that if I was going to give both clubs their due I should use each one for at least three to five rounds. OK, I made that part up. The Hibore was like swinging a double car garage, the head was too big. I can hit it farther with a shaft that weighs more because i can swing it the same speed mph.

The black and yellow stock shaft is another thing altogether. I love it, but for me it takes a little while to get used to a new club.

It would be safe to say they did well though the two do perform as differently as they look.

As I have stated above I am more of a golf traditionalist and have scoffed many, many times at the mere mention of nie square driver.

Alright, I am going to add something about this Nike Dymo Driver. I Bught this club as my first real good driver.

Things like lie angle, MOI, overall head size, face depth, and center of gravity vary from one loft to the next.

But we are not, and will not. Being somewhat of a newbie and a high handicap duffer, I was looking for a driver that pretty much did the work for me.

Even though I hit the ball an average of 15 — 20 yards longer, I was flaring the ball left and right. The difference is great.